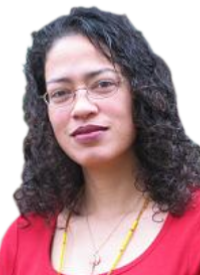 Jalane Schmidt is Associate Professor of Religious Studies at the University of Virginia, where she teaches classes on Latin American, Caribbean, and African diaspora religions. For years, she has conducted field research and archival research in Cuba, and she is the author of "Cachita's Streets: The Virgin of Charity, Race and Revolution in Cuba" (Duke UP, 2015). She also teaches classes on critical whiteness studies and religion, and on social movements.

She is an organizer with the Charlottesville chapter of Black Lives Matter. She has appeared in numerous national and international news outlets, and frequently speaks to audiences about whiteness, white supremacy, policing, and affordable housing.

Schmidt has been active since 2016 in the local struggle to rid Charlottesville of its Confederate monuments, and during the 2017 #SummerOfHate, she helped organize counter-demonstrations against white supremacist rallies in Charlottesville.

America, this Is not a drill: Sounding the Alarm Against White Supremacy
The flames of white supremacist violence which engulfed Charlottesville during the 2017 Summer Of Hate did not occur in a political vacuum. Charlottesville simply experienced an advanced wildfire which continues to spread to the rest of the country. Specific alt-right and other leaders since 2015 have stoked reactionaries who perceive demographic change as a threat. The menacing chant of the so-called “alt-right” -- “You will not replace us!” -- reveals the key role of fear in their strategy to animate hateful, torch-filled attacks on vulnerable communities.

Listen to us and believe us when we cry. For centuries, we have choked on smoke. Now we (again) feel flames engulfing us. America: this is not a drill. Thus the sense of urgency which spurs anti-racist activists to sound the alarm: it will be too late to intervene after the house has already burned to the ground. Members of marginalized communities need more than just “allies” if we are to quench this fire. We implore white accomplices to leverage the relative safety of white privilege to take preemptive action, to join the long-standing struggle against white supremacy which is led by people of color. Publicly reject and challenge alt-right messaging, wherever it is uttered.

This talk will issue a call to action that will equip listeners to take immediate action against the recent rise of white nationalism and against the long-standing legacy of white supremacy.